Ciao, everybody. There are probably a good handful of blogs out there written by HEMA experts. This isn’t one of them. I’m just an enthusiast, but I know a few things. Most importantly, I’m excited about HEMA and I want other people to be excited about it, too. It’s a lot of fun, great exercise, and you get to ruin Game of Thrones for your friends and yourself by saying stuff like, “why is Arya Stark always holding her sword with the knuckle guard ass-backwards?”

By now, you probably have a couple of questions: 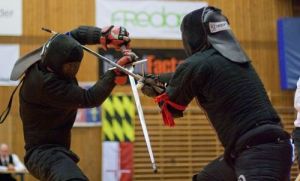 This one’s pretty easy: HEMA stands for Historical European Martial Arts. It’s not a specific fighting system, but rather a catch-all for fighting systems of European origin from classical antiquity through the 19th century. It covers everything from Ancient Greek systems to how to fight with a rifle-mounted bayonet. However, the focal point seems to be late medieval and Renaissance fencing. The reason for this is fairly simple — the late middle ages produced some of the earliest surviving examples of period fighting system treatises. Many of them were written by German and Italian masters from the 14th and 15th centuries. The longsword is particularly popular in HEMA because it was the primary subject of some the earliest treatises. Unlike some of the eastern martial arts, there are no surviving masters for, say, longsword fencing. It’s a revival of a dead art that requires interpretation from texts and cross-training with later systems to fill in the gaps.

2. Who the hell are you?
I’m a 30-year-old … man? I guess? … and I started HEMA about a year ago. I caught myself wondering what real sword fighting looked like. I knew that popular media probably hadn’t been doing the topic much justice, which seemed silly, given that sword fights are often a focal point for movies on the topic. Then I remembered that it’s the 21st century, so I don’t have to wonder anything for more than a couple seconds. I found some videos on YouTube showing how people actually did it (or at least modern people making an effort to do it the right way).

After watching some videos, I had two thoughts: one was that the real way of doing it is infinitely cooler in every way than the “hit other guy’s armor with your sword until one or both of those things breaks” method that fight choreographers seem to favor. The other was that it seemed like a lot of fun.

So, fast forward a year and I’m still no HEMA expert. I think that’s the important takeaway here: I’m a hobbyist; not an archaeologist, historian or even someone with much in the way of martial arts experience. If you want someone who can provide you with first-hand knowledge of martial weapons, history, advanced technique, etc., I recommend burning through Matt Easton’s Schola Gladiatoria channel on YouTube. He gives lots of mini-lectures on weapon dynamics, archaeology and HEMA technique, among other things. Even if you’re not into HEMA, the history is very cool and he takes a practical approach to understanding why medieval people did things the way they did. Other good YouTube sources are:

So you might ask, if I know relatively little about HEMA, why am I writing a blog about it? First, I think there’s a huge amount of poor information on medieval fighting and equipment, and you don’t have to do much study to know a great deal more than your average YouTube commenter when it comes to HEMA.

Second, I feel like a lot of folks in the HEMA community, especially online, can be kind of elitist and prohibitive. Before you jump down someone’s throat for believing you can cut through steel with a katana, or that medieval swords were all dull for some reason — ask yourself: why should most people know this stuff? If someone has the energy to even make an erroneous statement, it probably means they have a higher level of interest on the topic than most. Instead of viewing their relative ignorance as an opportunity to win Internet points that don’t matter, view it as an opportunity to spread information and foster interest. Fencing is not a solitary sport — you need at least one other person to really do it. Its niche status and expensive equipment are prohibitory enough to keep most away. The goal should be to expand the HEMA population. More fencers = more fencing. Less fencers = less fencing. Ipso facto, if you like fencing, you should want there to be more fencers. Which means not treating normal people like garbage. Never forget: we’re the weird ones.

OK, that’s enough for now. Here’s a cool Fechtschule Gdansk video. If this doesn’t appeal to you, you probably won’t be that into HEMA. (Hot tip for if you don’t like AC/DC, but still want to enjoy this video: put it on mute and play another song by a band you do like.)